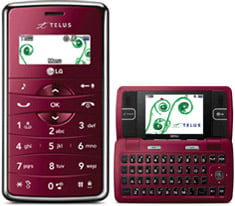 Roughly a month ago we saw Telus adding the LG KEYBO — which is also known as LG enV on Verizon — to its portfolio. Now the Canadian CDMA carrier has decided that offering the device in simple black isn’t enough. Ladies may want some other color, hence Telus is introducing the LG KEYBO in pomengranate. As you can see from the image on the left, the device seems designed for the savvy lady texters. The full QWERTY keyboard is there to help them type faster and more accurate.

Other specs include QVGA screen, Bluetooth, music player, built-in GPS and a microSD memory card. As for the services supported, just like the original KEYBO, the red-ish version can also sing along TELUS mobile music, TELUS Navigator and Windows Live Messenger.

The price is unchanged, though, and you could grab the KEYBO in pomengranate (or in black) for CA$49.99 on a three-year contract. The amount further goes up if you want to commit yourself on a less-term contract or want the device sans any monthly obligations…

Back in December of last year we wrote about Nokia's weird-looking slider patent with rotating camera on top of the...