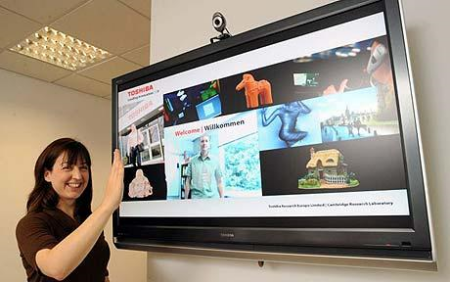 The Telegraph.co.uk has an interesting story about a TV developed to sense hand gestures as a means of control, rather than using the traditional remote. Following on from all the hype regarding the combined gesture/hardware remote of the Nintendo Wii, Toshiba’s TV trumps that by doing away with the hardware altogether.

The system uses a small camera (currently mounted on the TV), plus some clever software to differentiate (a) the hand and (b) the movement itself, from the background.

Of course, we’ve also seen a ton of developments in recent months around motion/gesture control in mobile devices – from the iPhone, to N95, to LG devices (using accelerometers) – but could we envisage a situation one day (soonish) where you have a “Minority Report”-like interface to multiple consumer devices?

Toshiba believe this tech could be within TVs in five years – who knows where mobile development will have got to then?!!

[Via: Telegraph.co.uk / Image via: MASONS]

With 3G usage in the US surpassing Western Europe, it's not all that surprising to hear that the US has...