Now this is what we’re talking about. The mobile ecosystem is entrenched in a mobile browser war that would have all mobile phone users around the world surfing all those internets in full HTML glory, directly on their mobile phones. Regardless of computing power, data connection speed, or handset form-factor, the likes of Mozilla, Skyfire, and Opera are all vying for the premier application-spot on your handset.

So, where does that leave Windows Mobile’s built-in mobile web browser? Sort of in the dust. It’s sad, but true. 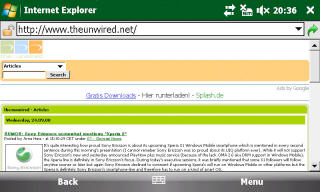 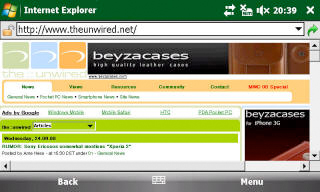 The new Internet Explorer Mobile 6 was promised to us by the end of 2008, bringing with it full HTML browsing and even integrated Silverlight support. Alas, the year is slowly coming to a close and Microsoft seems to be readying their overhauled Internet Explorer Mobile 6 for prime time. A couple screenshots of the new mobile web explorer have popped up on the web and it’s looking good. Internet Explorer Mobile 6 uses the same codebase as the desktop version of IE, making for some seriously powerful browsing with full HTML rendering capabilities. There’s no indication of any tabbed browsing (from what we can see in the screenshots), which could give competitors (ahem, Opera) the upper-hand, but there’s no telling what Microsoft has planned for PIE6 by the time it hits commercial status.

Full HTML rendering, Silverlight support (maybe Flash, too?), and tabbed browsing would give Microsoft the browsing-punch to take on the likes of Opera, Mozilla, and Skyfire. Will it happen? Stay tuned.