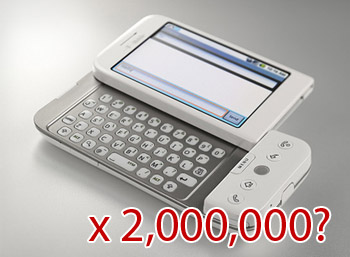 All eyes are on Google and their first mobile phone. HTC, the company that actually makes these babies, is expecting to produce 2 million T-Mobile G1 units. Of that number, between 400,000 and 500,000 G1s are expected to be sold within the Q4 2008 alone.

In money terms, producing that many devices would make the Taiwan-based phone maker NT$7 billion richer in Q4 2008, and NT$18 billion next year.

Let’s put the numbers in a perspective, shall we. Two million units doesn’t seem much when compared with Apple’s original plans to sell 10 million iPhones. However, it is important to note that the G1 is the first Android-powered phone on the market and something tells us we’ll see more smartphones powered by Google’s mobile OS released in the coming months.

In the meantime, by selling the G1 for $179, I’ve no doubts T-Mobile will reach its sales objectives…

Samsung i907 coming to AT&T as Epix

Forget about the BlackJack III. AT&T had it enough with BlackJacks, hence the next QWERTY-keyboard equipped Samsung smartphone will be...