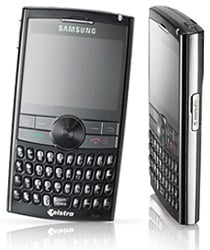 After almost a year from when it was announced in the U.S., Samsung BlackJack II is hitting Australia through Telstra. The 3G-enabled, Windows Mobile Standard edition powered smartphone works on the operator’s Next G network and provides primarily business users with most of the tools they could need to stay productive while on the go. This includes Microsoft Push Email support, Mobile Office and the full calendar synchronization.

We’ve already talked about the BlackJack II’s specs. Let me sum it up — it packs a 2.4-inch QVGA screen, GPS receiver, 2 megapixel camera and a microSD memory card slot. Telstra’s Jack comes with the latest version of Windows Mobile (6.1), meaning the device should be more stable than the original, Windows Mobile 6 powered i617.