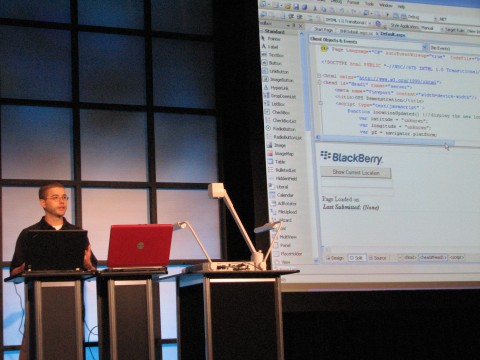 Following that, we start getting into the nitty-gritty and bloggers start squinting in confusion. Ken Wallis came on to talk about the updated JDE plug-in for Eclipse, which garnered a decent reaction from the crowd. Tim Neil followed up with the web IDE, showing how the environment works when dealing with the BlackBerry browser. Expect a launch next spring. Another project which is still entirely in testing phases came from Ergin Guney, who was working on server-side development tools. No timeline yet, but stay tuned.

David came back on after that and said he was looking forward to useful, usable apps coming out from the developer community. Hey, so are we. On that note, I have one request, to both carriers and developers – for the love of all that is holy, can we skip the lightsaber app for the Storm? Please? 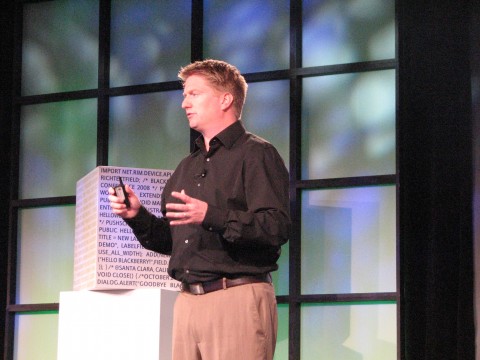 Jeff McDowell then stepped onto the stage to wrap things up. Hey… we know that guy. He was modest in showing off some numbers of the BlackBerry rollout: “Don’t want to sound like we’re bragging…”, even though they’ve got some 150,000-odd enterprise servers set up. Jeff announced a revamped online Developer Zone, which will include forums, video libraries, improved documentation (big hurrahs for that), and bug tracking down the line. He also hinted at progress on their upcoming certification programs, but those were announced a long time ago, and I still don’t think they’re live. What’s going on there?

Jeff also talks happy thoughts about helping corporate and commercial developers, as well as some added info on the previously-mentioned Application Center and Storefront. They’re aiming for a March launch, but developers will be able to submit their applications in December. He made it very clear that RIM will have defined criteria for admission, so devs wouldn’t be stuck in suspense over the whole process. Lots of applause for that. Jeff also mentioned briefly how the BlackBerry Wallet application PayPal mobile integration with the store. Buying upgrades to existing software should also be a breeze.

Last, but far from least… Everyone at the show is walking away with a BlackBerry Storm once it launches. Let me be the first to say GIGGITTY-GIGGITTY-GOO. Yeah, you can pick up a BlackBerry Bold if you happen to live in a country unfortunate enough to not have it yet, or the BlackBerry Pearl Flip, if that’s your kind of thing, but c’maaaan. Everyone’s getting a Storm. RIM’s doing good to get these things out there and build up some hype.

After that, Tyler wrapped things up – that’s it for the general session! Time to go roam and get some impressions from the people who actually know how to pound out a line or two of code.