So I resorted to a few stone-age tools known as “pen” and “paper” to take notes the rest of the way through, and continued taking plenty of pictures. Sorry to break the liveblog illusion, but no more timestamps. 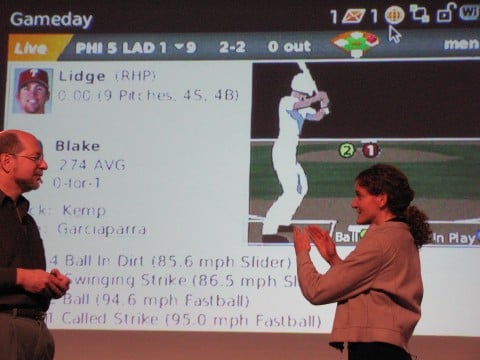 Along the web interface line, Alan started talking with MLB.com and their web-based game tracker. This segued into accessing content even when you’re offline. SQLite was announced, which recieved lots of applause. This kind of thing happened every now and then, when developers would get really excited about something, and us press guys would shrug and take note.

AccuWeather showed off how new APIs will allow developers to have data pushed to their applications and change how they run. In particular, the BlackBerry app’s icon will change depending on the weather in your area. This is something that’s come bundled with BlackBerry for awhile now, but if other developers are getting the same functionality, we could be seeing some interesting new twists to old tricks.

Web development tools were also announced, including updates to the Eclipse plug-in for the BlackBerry JDE. There was one feature in particular that seemed to get the devs excited, but I missed it in the midst of piledriving my laptop. Push APIs were also announced, putting some of RIM’s more characteristic technology in the hands of software developers. 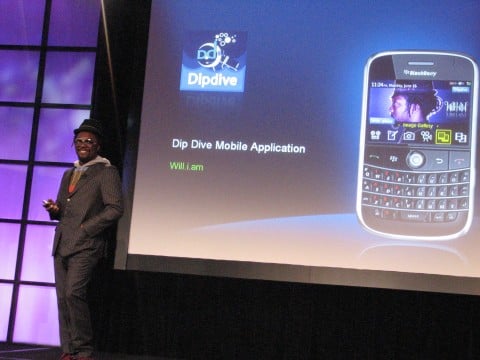 Well, hi there, Will.i.am from Black-Eyed Peas. He’s here to pimp out his Dipdive, launched for BlackBerry back in March. Dipdive is a music service geared towards musicians and allowing them to spread their tunes. In Will’s words…

Quote of the morning:

Will had lots to say on how technology in the music industry works, though. He mentioned how record labels rested on old technology and continued to push it instead of innovating and providing listeners with new, more convenient ways to get their music. The BlackBerry software itself used some pretty interesting theme work that turns the home screen into something tailored for the musician’s lifestyle. Following that, Alan closed up by advising developers to A) keep it simple, B) explore (possibilities, APIs, etc.), and C) network. 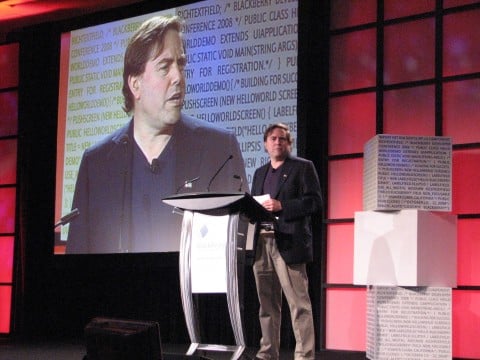 After that we had Rick Segal from the BlackBerry Partners Fund stepping up to talk a bit about the cool stuff that’s out there and how much money is available for good ideas. This was really good news for folks who are feeling nervous about the economy on the whole. 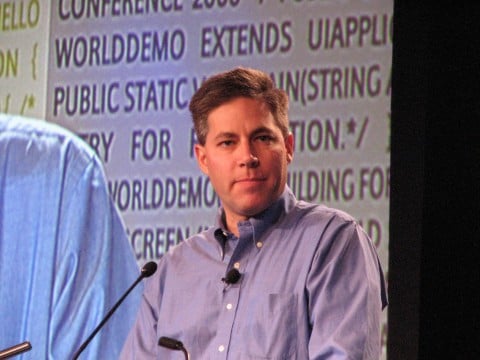 Rick’s partner, Kevin Talbot, then came on to announce the winners of the BlackBerry Developer Challenge. First place went to Poynt for their nice and simple local search app, second place went to Strands Social Player, for their shareable music service. A surprise (both to Doug and others) was the People’s Choice which was pulled from last night’s BBCool 15: Nobex Radio Companion!

Then we got another video, which gave us the fuzzy-wuzzies about BlackBerry development. The good man from RIM Mike Kirkup gave the blogosphere a shoutout. David Yach, RIM CTO came on following the clip and gave us a solid 10-point rundown of what makes a good mobile application. 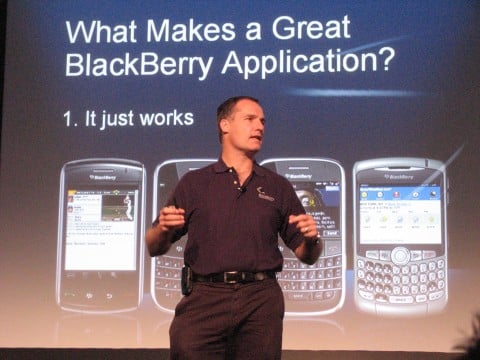 A nice list to keep in mind when trying or making apps for any mobile platform (except maybe number 4…). For those grouchy about the slow pace of APIs being release, David reassured folks that it was entirely a security issue, tying back a bit to Mike Lazaridis’ talk early about RIM’s enterprise roots. He also talked about backwards compatibility: “The apps of today will work tomorrow”.