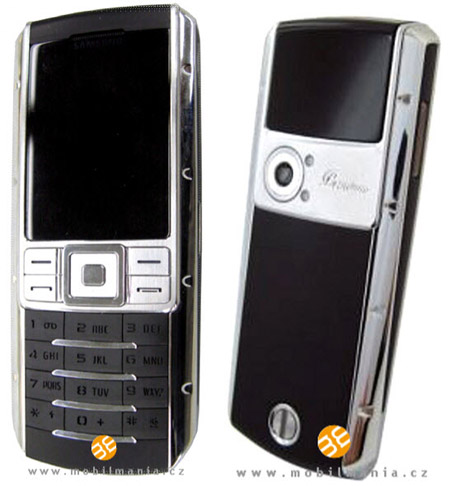 I never understood why all those luxury phones don’t come with dual-SIM slots. I dig major handset makers’ idea to drive handset sales by pushing users to own more than a single mobile phone. However, when it comes to luxury phones, users already pay a premium, so why not allow them to use two numbers with a single device.

All that being said, I’m glad we have one handset maker thinking in this direction. It’s Samsung, which is already known for its dual-SIM phones (among other things). Their latest/upcoming Samsung D9402 is made out of premium materials that include scratch resistant display glass and metal frame covered with rhodium. In addition, the device relies on Bang & Olufsen/ICEPower amplifier to improve sound quality of the phone speakers.

Other specs include tri-band GSM/GPRS/EDGE radio (900/1800/1900 Mhz) for the 1st SIM card and dual-band GSM/GPRS/EDGE radio (900/1800 Mhz) for the second. The screen is 2-inch QVGA; there’s a 5 megapixel camera on board with autofocus, image stabilization, smile detection, WDR and LED flash, FM Radio with RDS; and 1GB of internal memory is further expandable with microSD memory cards. The Samsung D9402 measures 115x48x16 mm and has a weight of 140 grams. I don’t see a lack of 3G as a problem – after all you won’t use that many data services on a 2-inch screen, right?

The Samsung S9402 still waits to be officially announced when we’ll have more details, including price, availability, and the markets where it will be sold…