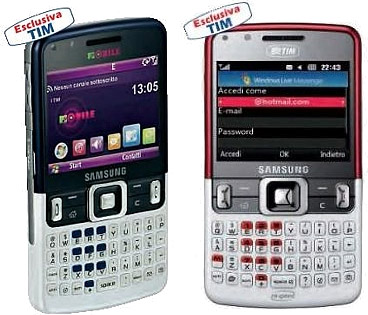 Samsung is launching a new Windows Mobile smartphone in Italy called Samsung C6620. From what we can tell, the BlackJack-like handset comes with an improved QWERTY keyboard with buttons looking like those found on Nokia E71 or Palm Treo, which make typing way more convenient. Or at least, that’s my experience.

Specs wise, there’s a tri-band GSM/GPRS radio (900/1800/1900 MHz) on board, QVGA non-touchscreen, 3G (HSDPA), 2 megapixel camera, 20 MB of internal memory that is further expandable with memory cards. Windows Mobile 6.1 Standard edition is running the show. Lack of WiFi and GPS may be a dealbreaker for many, myself included.

In Italy, TIM is selling the Samsung C6620 in “Wine Red,” “Apple Green” and “Navy Blue” for 199 EUR with a contract. We’ve no idea when nor whether the new Samsung smartphone will start selling in the U.S. The FCC approval is there, but that doesn’t mean much…

Viigo Launches NBA Service for all the Ballers Out There

I have to admit, I'm not much of a basketball fan. I do get interested come playoffs, but I still...