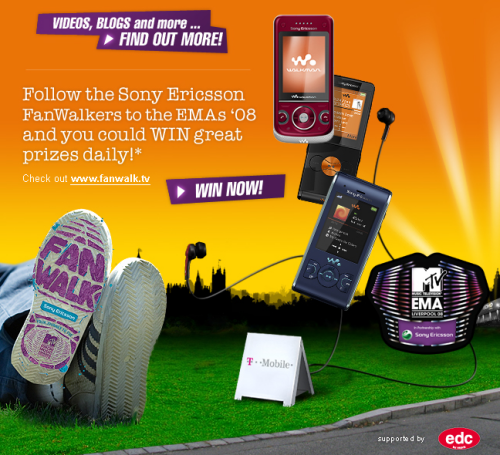 For the biggest FanWalk in music history we searched for the toughest and craziest music fans in Europe. The lucky 100 were selected from 3000 die-hard applicants from all over Europe through a rigorous casting process in search of the most creative, passionate and dedicated music fans.

Keep up with their progress ONLY at www.fanwalk.tv as our cameras track their every step. Watch the daily webisodes, explore the picture gallery and read the FanWalkers blog to get the latest news on the road to Liverpool.

Don’t miss out on the fun and adventure! Follow the FanWalkers on their journey on www.fanwalk.tv and you could also WIN great prizes such as cool Sony Ericsson music phones and accessories!

Sounds crazy doesn’t it, but you’ve got to give it to Sony Ericsson for innovative marketing campaigns – there is some serious advertising exposure going on there, and having been to previous events of theirs, I am sure it will be incredibly well-organised. Sony Ericsson rocks (literally) !!

When is mobile gaming more than graphics performance?

With the plethora of mobile games available for my iPhone 3G and the massive catalogue of Windows Mobile games, you'd...