When the iPhone launched, the world scoffed at the first-ever Apple mobile phone’s lack of physical keyboard or any real enterprise support. Business users around the world brushed aside the iPhone as a casual fad that would never amount to any real significance in the mobile space.

Lo and behold, the iPhone 3G brought serious enterprise support and a sleek, refreshed design, giving the enterprise segment something to talk about. And, with the iPhone OS offering unparalleled eye-appeal and an intuitive user interface, the iPhone has fast become a business user’s top-choice. 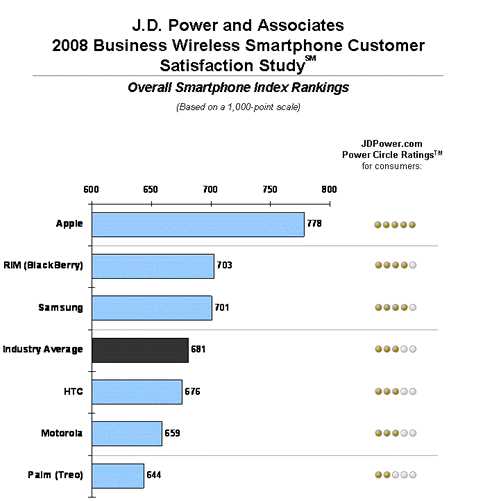 The survey asked users to rate enterprise handset manufacturers on a 1,000 point scale that measured satisfaction in categories like “ease of operation,” “operating system,” “physical design,” “handset features” and “battery aspects.” Of all manufacturers surveyed, Apple managed to score a class-leading 778 points – mostly for the iPhone’s ease of use, design, and features.

BlackBerry maker Research In Motion scored a 703, giving it the No. 2 spot. Samsung eeked out a respectable 701 points, netting it a third place finish, while Palm lagged behind all others with their Treo lineup of smartphones scoring a meager 644 points.

Enterprise users cited Internet capability, email access, design, Bluetooth functions, and keyboard format as the most significant factors in deciding which smartphone was the best fit for their company.

The iPhone and iPhone 3G have their fair share of problems. But, both handsets’ strengths lie in their intuitive multi-touch interface and a snazzy design aesthetic that has apparently captured the minds of both consumers and business users alike. Now, all we need is a removable external keyboard.