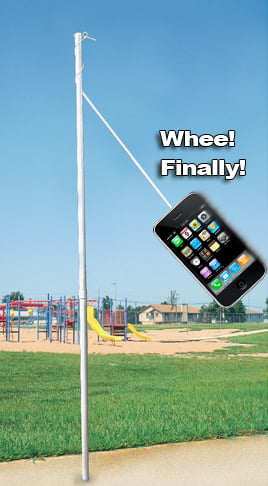 While it’s nothing like a solid (or even vague) launch window, AT&T’s CEO Ralph De La Vega was quoted as saying that AT&T would be offering an official iPhone tethering solution “soon.”

For the uninitiated, “tethering” is the process that allows you to use your mobile phone’s data connection (preferrably 3G) on your laptop (or even desktop, if that’s your kind of thing). By tethering your handset to your computer, you are basically using your cellphone as a wireless modem.

AT&T has been rumored to be holding off on an official iPhone tethering solution due to the disproportionate 3G data traffic passing through iPhone 3G handsets. This subset of AT&T’s 3G devices has reportedly been overloading the US wireless carrier’s data network, leading to slow data speeds. AT&T is thought to be in the process of shoring up their 3G network to handle the additional data-load that’s likely to accompany any iPhone tethering solution.

We’re not sure just how “soon” AT&T will be offering their iPhone tethering plan, so it might be prudent to file this one under “rumor.” For what it’s worth, MacRumors is reporting that the next iPhone firmware revision, iPhone 2.2 OS, will include built-in support for iPhone tethering.

Like so many club-scene aficionados blowing their Friday paycheck in a bid to "make it rain" dollar-dollar-bills-ya'll, it seems that...