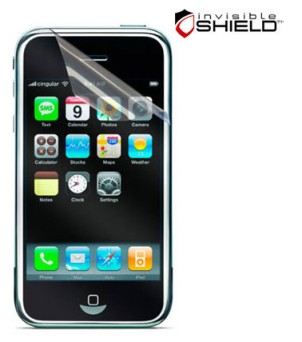 The weekend might be imminent, but for me it is going to include probably one of the most complicated screen protectors installs I’ve ever attempted. What am I talking about? Well, I ordered the Invisible Shield (see previous post here) after lamenting the poor performance of the other screen protectors I got for the iPhone 3G.

Apparently this bad boy is the screen protector to end them all, with front and back coverage, including the iPhone 3G contours (which ain’t easy to do from a flat cover). The way this is accomplished is to provide a flat sheet, with slits in the corners – so that when applied to a curved surface, the slits allow the sheet flexibility to curve around the iPhone’s edges.

The same sort of principle is used in breast-lift surgery, where a keyhole excision is made, in order to allow the nipple to be moved up the breast, and the (smaller) tissue/skin surface area to be sutured together in a natural curve. Nice.

Just to clarify, I won’t be doing any plastic surgery as such – although the Invisible Shield is made of some kind of plastic amalgam that is incredibly strong, yet still allows touch.

Anyway, I’ll let you know about success or failure once I got tha bad boy stuck down – wish me luck!

PS: the instructions say to turn the device off for 24 hours, and allow the invisible shield to try – right, cause that’s practical…

Punch-O-Meter Game for the iPhone Hits the App Store

Punch-O-Meter from DoApp is the latest in a wide range of 'party' games to hit the iPhone. I call it...