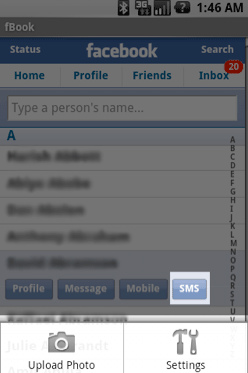 Remember last month when I reported that Facebook would not be developing a mobile version of their service for the Android OS? Well, in an interesting development from an outside 3rd party developer, you can now get Facebook on your G1, well… sort of.

All this time while Facebook and Google were griping at each other, a new Facebook app for Android was being worked on by the guys at Next Mobile Web. The new app is called fBook, and it is in effect a ‘wrapper’ that optimizes the Facebook iPhone web app and also fixes some of the problems associated with it. From what I can tell it appears to be identical to going to m.facebook.com from your mobile browser, with the addition of some other features like the ability to upload pictures.

With that said, it looks like Facebook and Google are no closer to seeing eye-to-eye. If you’re waiting to see an official Facebook app for Android developed by the folks at Facebook… You may have to wait awhile yet. In the meantime you can take advantage of this new ‘wrapper’ app that gives you the opportunity to fulfill your Facebook fix from your Android powered device.

Look for fBook in the Android Market to test it out for yourself.

Spb Software is out with the latest version of their award-winning on-screen keyboard for Windows Mobile - Spb Keyboard 4.0....