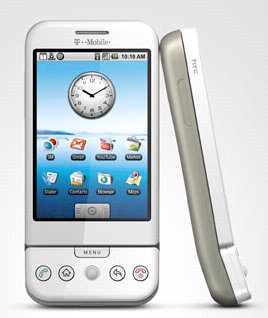 According to the peeps at TMO News (who are consistently reliable), the White T-Mobile G1 has encountered some delays. Looks like the device will not be making an appearance at the big T-Mo till after Thanksgiving. What’s causing the delays? Rumor has it that there are issues with the white paint itself. The paint is chipping and production teams are working hard to correct the problem.

So is white the only other color available for the G1? Nope. The Bronze/Brown G1 is in high demand, and is rumored to make a return to the stores by November 24th. The original Black G1 is also available online at the moment on backorder.

Would I hold out for the White G1? You know, as sad and somewhat pointless as it sounds I probably would. I know the color of the device does not matter a heck of a lot, but I really dig my white iPhone 3G… so a White T-Mobile G1 would fit nicely into my growing war chest of mobile devices.

Google has been working on a new voice-recognition search app for the iPhone (Google Mobile App) for some time now....