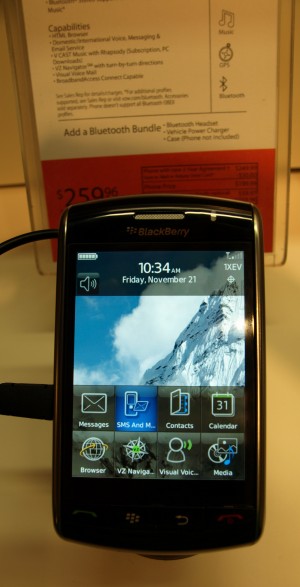 So the day that BlackBerry fans and touchscreen smartphone enthusiasts have been looking forward to for months has finally arrived. As of the start of business today, Verizon started selling the highly anticipated BlackBerry Storm 9350 to eager customers. The BlackBerry 9350 Storm represents the first-ever touchscreen BlackBerry and features an innovative, industry-first touchscreen technology, dubbed “SurePress.” The SurePress system essentially turns the BlackBerry Storm’s touchscreen into one giant mouse button.

Rather than relying on pseudo-haptic feedback mechanisms that do little more than vibrate the entire device with every key-press, the BlackBerry Storm uses a capacitance touchscreen (like the iPhone 3G) to detect finger position. Placing a finger lightly on the Storm’s touchscreen highlights the target key, a more forceful finger-press cause the entire touchscreen panel to “click” downwards. It takes a bit of getting used to (especially for iPhone owners used to typing with light taps of the touchscreen), but SurePress makes for a great compromise between no-feedback and pseudo-haptic feedback.

In the spirit of the industry’s first touchscreen BlackBerry launch, we’ve gathered some in-store footage of the Verizon BlackBerry Storm for you to enjoy. We noted that the BlackBerry Storm OS was a bit laggy, but a store representative assured us that the lag-issues were due to customers not exiting out of applications. The still-open applications were causing the Storm’s browser to and the screen-rotations to bog down a bit.

Apple's iPhone 2.2 OS has long been expected to bring a host of new features to the iPhone and iPhone...