The Android OS-powered T-Mobile G1 has high aspirations. The first Android smartphone has its sight set on displacing the iPhone and iPhone 3G as the “gotta-have” touchscreen smartphone this holiday season. But, neither Android OS nor the T-Mobile G1 has an answer for the iPhone’s Visual Voicemail feature. Until now. 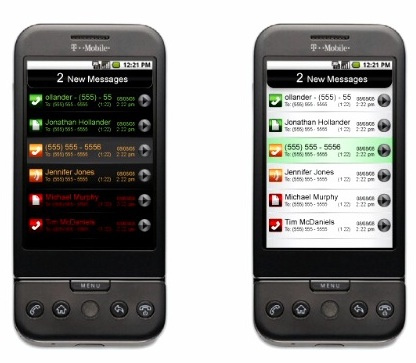 Visual Voicemail allows the user to see a graphical representation of their voicemail inbox, sorted chronologically by caller. The strength of visual voicemail lies is that it allows the user to actually see how many voicemails are waiting to be heard and from which caller each voicemail originated. Users can decide which voicemail messages are worth listening to and which can be left to review later.

Now, thanks to the creative developers at PhoneFusion, the Android platform and the T-Mobile G1 can now proudly say that they have Visual Voicemail capability. PhoneFusion will debut their Visual Voicemail application before the end of 2008, bringing Android users “the ability to centralize all of their voicemail boxes and see – right on the screen of their Android-powered mobile device – a list of their voicemail messages.”

Look for PhoneFusion‘s Visual Voicemail application on the Android Market by year’s end.

Under the Radar: Mobility, Mountain View, Calif. – Nov. 12, 2008 – PhoneFusion™, an innovative provider of reliable, hosted communications solutions, will preview Fusion Voicemail Plus™ for Android smartphones today at the Under the Radar: Mobility event. This free visual voicemail application will provide users the ability to centralize all of their voicemail boxes and see – right on the screen of their Android-powered mobile device – a list of their voicemail messages. The service will also allow users to listen to their voicemails directly from their smartphone. PhoneFusion expects that
Fusion Voicemail Plus will be available on Android Market by the end of Q4.

PhoneFusion’s Fusion Voicemail Plus’ iPhone-like visual voicemail application is already available on any cell phone network for BlackBerry devices as well as smartphones running on Windows Mobile 5 and 6. Fusion Voicemail Plus provides a faster, more efficient way to listen to voicemail messages in the order people want, rather than dialing multiple voicemail systems and listening to the messages in chronological order.

“Our Fusion Voicemail Plus application is tremendously popular with our existing customers who wanted iPhone-type functionality on their favorite devices,” said Louis Libin, chief executive officer, PhoneFusion. “With the launch of T-Mobile’s G1, the first Android-powered smartphone, people have been looking for an innovative visual voicemail app that runs on this breakthrough device. We believe Fusion Voicemail Plus fills this gap, giving the Android community a better way to stay connected when it matters most. We expect this application will quickly become one of the favorites on Android Market.” PhoneFusion was hand-picked to take part in the Under the Radar: Mobility event as one of a select group of Graduate Circle presenters.

Sprint is losing more than just customers and profits this year. The struggling US wireless carrier has just lost its...