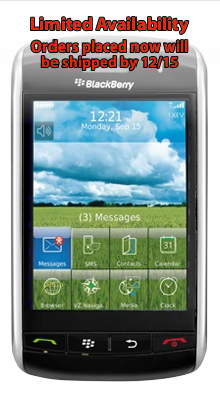 Tepid reviews and limited stock have done little to fizzle BlackBerry Storm hype in the U.S., as lines still stretched out the door of many Verizon stores on launch day. Unfortunately, those at the back of the line who had to resort to back-ordering a device will now have to wait until as late as December 15th. before it’s even shipped. There are some theories floating around that the shortage is due to an insecure OS (4.7.0.82) coming with the initial shipment, then getting pulled so devices could be downgraded to 4.7.0.65. Maybe it will take Verizon up to mid-December to get all the devices running .65. One way or the other, it looks like Canadian carriers won’t be lagging too far behind Verizon, as Bell and Telus are both likely to be offering the BlackBerry Storm mid-December as well – we can only hope that they won’t suffer from the same inventory and software issues as Verizon. Those who are still antsy to pick up a Verizon BlackBerry 9530 complete with 3G, GPS, 3.2 megapixel camera, and 480 x 360 SurePress touchscreen, delays be damned, can order now for $199.99 on a two-year contract with mail-in rebate.

On the heels of their successful BlackBerry Pearl 8130 release, Virgin Mobile Canada has officially released the BlackBerry Curve 8330....