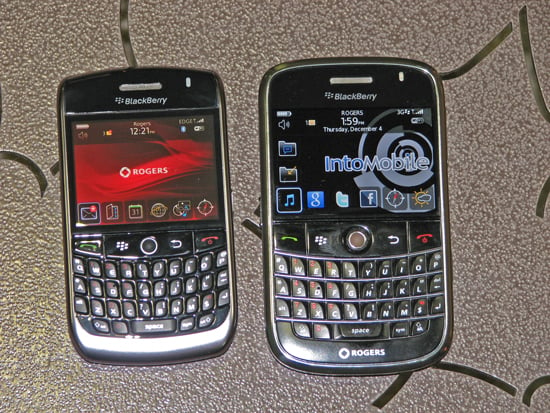 So what’s the difference between an 8900 and a 9000? Besides 100? Size, baby. Rogers’ new BlackBerry Curve looms dangerously close as dummy units hit stores, offering a slimmer, sexier version of the BlackBerry Bold and attempts to butt heads with Telus and Bell’s BlackBerry Storm for holiday supremacy. Before you start throwing your chips in with the RIM’s touchscreen smartphone, we still haven’t seen how much of the OS RIM will be able to repair after the Verizon train wreck, and even then, most consumers will feel more comfortable buying a BlackBerry that’s a BlackBerry rather than a BlackBerry that’s an iPhone. It should prove to be an interesting holiday season in Canadian wireless.

This dummy unit graciously given to me by the Rogers folks here in Ottawa is noticeably tighter than my BlackBerry Bold. The smaller soft keys provide greater screen real estate (but still not quite as big as the 9000), and the headphone jack closer to the top of the device is more convenient, although the transfer of most keys to the right side of the device may cause an uprising amongst our left-handed brethren.

The keypad itself is considerably softer than the Bold, while still retaining some bounce. It’s definitely not as snappy as you might be used to on the old Curve models, but that’s not a bad thing by any means. The keys along either edge deserve extra mention, as they not only hug the rim closely, but they also feel slightly more elevated, offering a clear boundary for your thumbs to remain within the luscious pool of QWERTY goodness. The keypad borrows distinctly from its 8300-series predecessors, yet it is not without some influence from the Bold; the 8900’s keys have slight ridges to make sure your thumbs catch them, but the gaps between the keys will be what really keep you in line. They’ve also done away with the elongated Shift keys on the bottom-left and right in favour of standardizing with the Bold’s layout.

Aside from that, the top of the device borrows design directly from the BlackBerry Storm, with Lock and Mute keys emblazoned into a single seamless button, and melting into the rest of the device face. I’m still hankering to try a real 8900 to see how the trackball differs, as this atomic upgrade promises to be tighter, cleaner and more precise. The in-store rep confirmed $179.99 on a three-year contract, and hinted that it will be available as soon as tomorrow. With the BlackBerry 8900 showing up on Wireless Wave, I certainly believe it. Other price options include $549 on 1 year, $524 on 2 with no data, $499 on 2 with data, or $499 on a 3-year plan with no data. Overall, the BlackBerry 8900 Curve should appeal to those not willing (or able) to trust RIM’s new touchscreen blitz.

The latest rumours from Bell are pointing to a December 15h. launch date for the BlackBerry 9530.  The Telus reps...