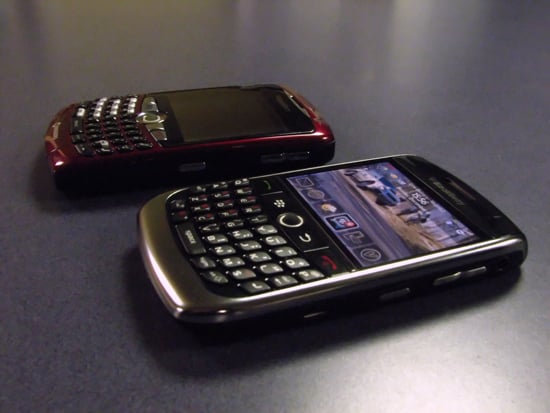 The BlackBerry Curve 8900 launched up in the Great White North this week, and one of my buddies at Magmic was first in line to nab one. With a bit of harassment and promises of spare swag from BBDC, I managed to get some time with a live model. You can check out our hardware impressions with the dummy model, or the size comparison video with the Bold, but much more telling is a comparison with the old Curve model, the BlackBerry 8310. While the difference between the Bold and the 8900 was more stark, the 8310 was much closer to the new device. Despite that, the Curve 2 manages to stay a bit slimmer, although a waistline is far from the biggest differentiator: a 3.2 megapixel camera, improved screen at 480 x 360 pixels, and both Wi-Fi and GPS under the hood make this a solid next-gen Curve. On the downside, we hear the vibration is a little bit weaker, and the sound is still noticeably tinny-er than the Bold.

As far as the software is concerned, it’s running 4.6.1, a marginal notch over the BlackBerry 9000. The only real differences I could tell was better autofocus in the Camera app, and an updated weather program, but I’m sure a little more digging will reveal some other minute updates. Rogers’ Talkspot UMA service works hunky-dory, as does streaming video from YouTube.  A quick camera shoot-out between the Bold’s 2 megapixel camera and the Curve’s 3.2 megapixels clearly showed the 8900 in the lead, although it might have just been the 9000 having issues with autofocus.

Recently I met a guy named Hedone Hawker from Maribor, Slovenia. He's from the same country as I am (Serbia)...