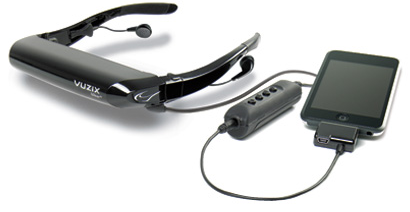 Vuzix, the company behind personal video iWear, today confirmed its latest products were compatible with an increasing range of mobile handsets as well as with an expanding library of mobile video content.

(Sidenote: I’ve posted on Vuzix before – check out here, here, and here, for more info)

“Vuzix headsets change the small mobile screen experience into a big screen event,” said David Lock, head of European operations.  “Our iWear headsets create a virtual screen, up to 62” large, right in front of your eyes. It truly is the cinema in your pocket and now there is no shortage of material to watch.”

“Nokia’s N96 with the BBC iPlayer on board is just one high profile example of the sudden expansion in content and connectivity that is now available,” he added.

Lock confirmed that handsets such as HTC’s new Touch Pro, LG’s Viewty, the Nokia 6500, N95 and N96, and Samsung’s Innov8 & Omnia models – together of course with Apple’s iPhone, iPod Touch and the other iPod models – were all compatible with the full range of Vuzix personal video headsets, including the two latest models, the entry-level AV230XL and the widescreen AV310WS. 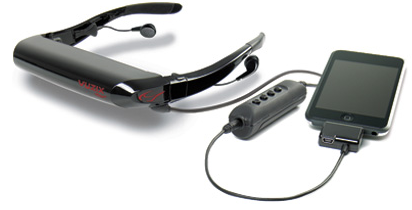 “We are now seeing more and more handsets enter the market with video out capability,” said Lock.  “We fully expect more new models from LG, Nokia, Samsung, and Sony Ericsson to be hitting the market with TV out in the next few weeks that will also work with our iWear headsets.

“With the enormous growth and interest in mobile video content, whether it is downloadable or streamed, from anyone of the hundreds of web-based video sources such as YouTube, BBC iPlayer, and podcasts from sites such as iTunes; there is no doubt that more people are watching more content on more devices,” he said.

All of the iWear video headsets are supplied with a cable that connects to the iPhone as well as the full iPod range.  The Vuzix box also includes a lead that connects direct to the Nokia N95 and N96.

A further “video in” cable is included as standard by Vuzix, and this connects to the video out lead for HTC, LG, Samsung and Sony Ericsson handsets as well to popular games consoles such as the Nintendo Wii.  These video out leads are either supplied with the phone or are available as an accessory direct from the manufacturer.

[For those in the UK:] Vuzix iWear personal headsets start at £129.99 and are available direct from Vuzix or from Amazon, Apple’s online store, Firebox, and Play.com. You can also buy iWear in selected 3 retail stores as well as from threeaccessories.co.uk.

Having tested Vuzix’s glasses, I can genuinely say they are a really nice piece of tech – something that as a traveller solves the eternal problem of straining my eyes my eyes to see a small screen, or lugging a laptop around – instead now you can have a BIG screen, portability, and use your Mobile – the best of all words! 🙂

We've heard of impromptu pilots safely landing an airplane with the help of SMS text message instructions, but this is...