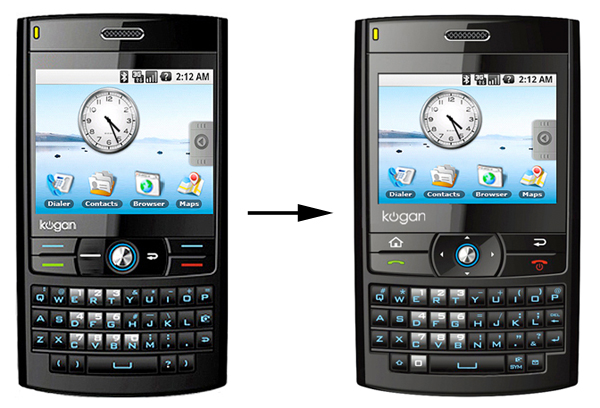 The world’s second Android phone, the Kogan Agora (and Agora Pro) have been reported to launch on January 29th of next year. At a price point of $299 and $399 (regular and pro models), Australians will no doubt be happy to get their hands on a much ‘sexier’ Android-powered device.

With that said, over the past 24 hours or so I’ve noticed some changes going on from the folks at Kogan. In a post I noticed over at Engadget Mobile, it looks like Kogan may be changing the design of the handsets up just a bit. Check out the photoshop work above for confirmation. You’ll notice that the new version appears to be wider. The directional pad is smaller and the device looks not quite as tall. No more shortcut keys are included, and they’ve moved the ‘0’ key to a position down in the bottom row.

I sincerely hope that these photoshopped changes will be reflected in the final device… and that this just isn’t some weak hoax to generate a little more hype over the device. All things considered, the Agora looks about one-thousand times better than the T-Mobile G1 (C’mon HTC… you disappointed me!). Keep reading after the jump for more details and specs on the Kogan Agora.

Key features of the Kogan Agora:

Here's a neat color for the Sony Ericsson C905 which should make the kick-ass Cyber-shot phone more appealing to women....