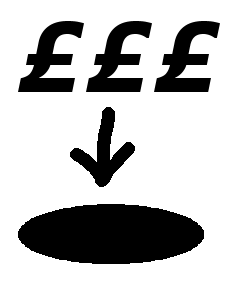 All me cash - goin down a black hole!

Yes, strange as it may seem, the favourite pastime of those people who steal bank details may well be topping up Prepay Mobile phones!

When you give some consideration to this however, it might not be quite as odd as you think – with the preponderance of ridiculously cheap devices in the market at the moment, it’s simple for crooks to ‘launder’ (if that’s the right word?) money in this fashion – particularly since it’s easier to top up at ATM machines now. There’s also the fact that to keep the fraud less noticeable, ‘everyday amounts’ are used, such as £20 or £30.

The problem of cards (and details) being stolen / cloned / frauded is one which is a big problem for the banking industry at large, and you will see maybe a couple of reports a year in the news about the scale of the problem – from what I remember it was several millions of pounds, just in the UK.

I’d imagine the issue isn’t limited to the UK either, since similar mechanisms exist across Europe, and the US too.

Just remember, the next time you check your account, look for spurious mobile prepay top-ups (particularly if they are not for the network of your carrier!) – as you may then have a frauded account on your hands!

What’s the most horrific bit of grammar mangling you’ve seen in a Mobile product?

Mobile tech is wonderful in many respects – the pace of innovation, the ability to make desirable products from seemingly...