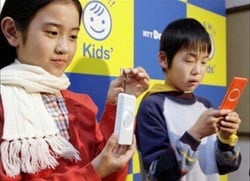 The government in Japan is looking at banning all mobile phones and devices from schools. Why? It seems there has been quite a rise in bullying associated with the devices. Government stats in the country have claimed that almost 6,000 bullying incidents have been linked to mobile phones this past year…. The year before somewhere in the neighborhood of 5,000 incidents occurred. One young boy actually killed himself when nude pictures found on his phone were emailed and shared around his school. Sad and tragic.

So what are the next steps here? A snippet from a report at Cellular News explains:

Responding to the issue, the government set up a group to study the problem – and it has now recommended a nationwide ban on mobile phones on school properties. The proposals will be put to the Prime Minister next month. The current Prime Minister is politically weakened at the moment, so it is unlikely that the move would be approved in a hurry as it would stir up a lot of controversy.

Looks like the wheels are in motion to impose a country-wide ban.

If you ask me, I consider children with mobile phones absolutely rediculous. I didn’t get my first phone until I was in high-school… Come to think of it, I didn’t know anyone with a mobile device until I hit high-school. Now don’t get me wrong, I realize times are completely different and the technology is so widespread and easy to find… it’s a different story. But still, I can’t imagine handing my own kid a mobile device… Unless the only thing he/she could do on it would be to call home or an emergency contact.

We already expected Apple to post an iPhone guided tour on their Japanese website, but what we didn't expect (but...