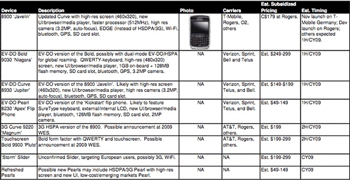 Sorry Americans, were you jealous after hearing about Canada getting the Wi-Fi BlackBerry Storm from Rogers? Not to fret, this leaked ’09 lineup gives us a rough idea of what BlackBerrys to expect from American and Canadian carriers, including lots of love for the EV-DO portion of the wireless world.

It’s a little sad that the CDMA Pearl Flip won’t be packing the video conferencing camera that the next GSM Pearl Flip (8200) is rumored to have, although things like that can always get squeezed in at the last second. It’s cool that they’re keeping the original Pearl alive and not letting it get bumped out by the Pearl Flip; GSM-flavoured 3G and a new screen is definitely enough to keep it a viable choice for consumers in emerging markets.

We had heard rumblings of a touchscreen Bold a few months ago, but it looks like the codenames got shuffled around. The big clincher here will be if it uses the clickable SurePress screen of the Storm, or if it will go for something a little more traditional. If they threw a stylus in there, then RIM would be in a fine position to rope in Palm defectors. If it does come out at WES in May, then the 3G Javelin will be a fine partner announcement. Most impressions of the BlackBerry 8900 have been good to date, often accompanied with the comment “Would be nice if it had 3G…”, so it’s an expected upgrade to make. For those still waiting on the new Curve, the lineup confirms earlier rumours of T-Mobile getting it in early ’09. Combined with the Storm getting Wi-Fi, RIM is quickly plugging the gaps in their feature sets, but it sure would be nice if they just included everything in the first place, no?

Finally, the Storm slider. I’ve been hankering for a slider BlackBerry for a long time. RIM’s been toying with new form factors since the Pearl two years ago, and is getting braver with touchscreen and flip form factors, but the slider style remains the last one they have to tackle to have a fully-rounded selection of devices. If the GSM Storm on Rogers can sufficiently squash all the bugs that the CDMA variant suffered, that would leave the following slider iteration to go above and beyond what the first Storm should have been.

Update: Woops, this is actually compiled by RBC Capital Markets as an analyst forcast. Still some good estimations there.

If you're a BlackBerry Storm user on the Verizon network, you've got a brand new piece of software to explore...