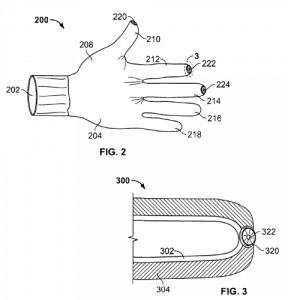 No, it’s not the Nintendo ‘Power Glove’, but it does kind of look similar in ways (needs more buttons and controls!)… But Apple has filed a patent named ‘High Tactility Glove System’ that could be used in many, many ways. Imagine using it to control your iPhone, iPod or even your iMac, Mac Mini, MacBook and so on. In particular, when you live in a cold climate like me, I’d get a kick out of being able to leave my gloves on. It is a bit of a pain to take your gloves off every time you want to answer a call or email in cold climates. Struggle to take off the glove, touch the screen, do whatcha gotta do, etc. With this new glove (I’ll call it ‘iGlove’) there would be no need for that! Simply leave your gloves on, and use your iPhone as normal.

I want one right now!

Official patent description: “This invention is directed to a glove system for operating an electronic device. The glove system may include an inner liner and an outer shell. The liner may be formed from any suitable material, including a material that is thin, electrically conductive, has low thermal conductivity, and/or has an “anti-sticky” finish. The outer shell may include at least one aperture through which the inner liner may extend to operate the input mechanism of an electronic device (e.g., on at least one finger tip). In some embodiments, the aperture may be at a finger tip of the outer shell. In some embodiments, a closing mechanism may be used to maintain the aperture closed when the user is not operating the electronic device. For example, an elastic ring may surround the aperture such that, in its non-deformed state, the aperture is substantially closed. The user may elastically deform the ring to allow the liner to pass through the outer shell.”

You can read more over at the US Patent Office.

It’s worth noting that this patent was actuallyfiled on June 28th, 2007… that’s one day before the official iPhone launch. I want my iGloves! 🙂

Earlier this morning a Pink iPhone 3G popped up on eBay. You can check out the auction here. Immediately when...