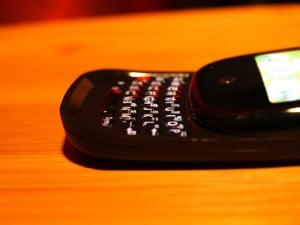 In the aftermath of the media blitz that was the Palm press event, Palm was kind enough to setup a Palm Pre Press Lounge where they showed off the new Palm Pre and Web OS in a more intimate setting. The Palm Pre is being touted as the next-generation handset that will help you navigate through your life – seamlessly and without wires. With a generous 3.1-inch capacitance touchscreen, 8GB of on-board storage, WiFi, Bluetooth, EVDO Rev. A, and a 3 megapixel camera, the Palm Pre is no slouch in the features-department. And, with the Linux-based Web OS powering the Palm Pre “experience,” the new mobile offering from Palm promises to bring the struggling company out of the red and ready to compete with the likes of Apple, Samsung, and even Nokia! 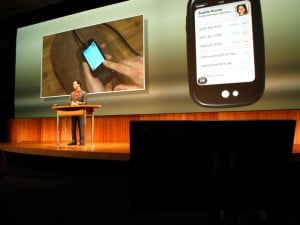 Let’s take a closer look at the Palm Pre. First, the handset will be launched as a Sprint exclusive in the US, but will be available in the future in GSM form. Next, the Pre sports a “high speed” processor built on the new OMAP3 architecture. Palm was hesitant to quote processor specs, presumably because they’re still tweaking everything to maximize performance and battery life, but we’re willing to bet the farm that the CPU will blow the doors off most smartphones currently on market.

Then, there’s the bevy of features. Things like the 3 megapixel camera, 8G on-board storage, WiFi, 3.1-inch capacitance touchscreen, and a vertically-sliding QWERTY keyboard make the Palm Pre a serious competitor in an increasingly crowded mobile segment. The Palm Pre features an arc-slider design reminiscent of the Motorola Z10 that is said to improve calling ergonomics, but we just say it’s “cool.”

Unfortunately, there’s no expandable microSD card slot. Palm’s VP of software tells us that an expansion card would add unnecessary complexity to the Web OS interface – something that goes against the platform’s intuitive philosophy. But, with 8GB of built-in storage, the Palm Pre won’t exactly be hurting for media storage space.

Now, the Palm Pre hardware is great, but without the Web OS, it’s not going to go anywhere. Built on a Linux kernel, the Web OS (which we believe is “Nova,” but can’t confirm with Palm reps), is Palm’s vision of the future of smartphone computing. All applications are shown as “cards” that represent a workspace. All “cards” can be organized in any order and allows the user to switch quickly between running applications (or “cards”) with just a flick of the finger. And, with true multi-tasking capability, the Web OS will be a productivity platform like none other. 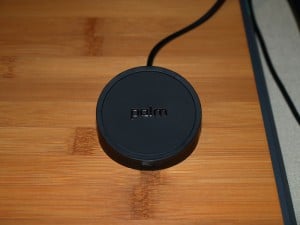 Speaking of finger-flicking, the Web OS is designed around an intuitive touch-based interface. Below the capacitance touchscreen lies the gesture-control region. Flick your finger upwards and you can access your application launcher. Flick your finger sideways and you can move back and forward through webpages and applications. For more on how the finger-flick works, check out our video (to be posted soon). And, the touchscreen features a comfortable friction coefficient that isn’t too slick but still allows you finger to slide smoothly across the screen.

Palm has also announced extensive support for web developers. All applications for the Web OS can be coded with web langages like Javascript, HTML, and CSS. Gone 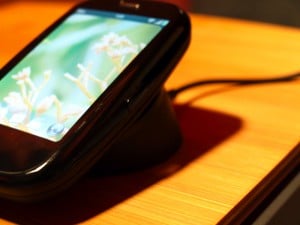 are the days where app developers needed to know more complex computer languages, the future is web-apps gone native!

Lastly, Palm has announced what could be the coolest manufacturer-integrated accessory – the Palm Touchstone. The Touchstone is a magnetic “puck” on which you rest your Palm Pre. The Touchstone charges the Palm Pre without wires – thanks to the magic of magnetic induction! With wireless charging solutions like Slashpower recently going under, we had doubts that we’d ever see wireless charging coming to market. But, with Palm’s Touchstone, we’re pleasantly surprised.

The Palm Pre and Web OS represent the next-generation of smartphones. Palm is even embracing the web developer ecosystem and we can’t wait to see how the Web OS guides Palm into the next decade.