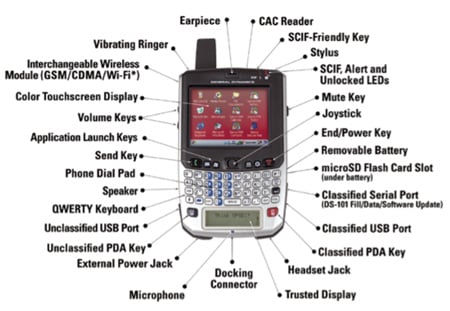 We’re all aware how President-Elect Obama does not want to give up his BlackBerry after he takes office. US Officials are still working on Obama, trying to ‘pry’ the BlackBerry from his hands due to growing security concerns. Luckily for Obama however, a few devices have surfaced that have been approved for web browsing, viewing of classified documents and email. One of such devices is the General Dynamics’ Sectera Edge:

…a combination phone-PDA that’s been certified by the National Security Agency as being acceptable for Top Secret voice communications and Secret e-mail and Web sites. Through three separate interchangeable modules, it works with Wi-Fi, GSM, or CDMA networks, and is dust-proof, waterproof, and rugged enough to survive repeated 4-foot drops onto concrete. Physically, it’s a chunkier second cousin to the Palm Treo 750, though with an additional LCD display below the keyboard.

The price is $3,350 with a two-year warranty, a princely sum that’s reflected in the Pentagon-worthy price tags for accessories: a simple adapter for a lighter plug costs $100. (Never again should you complain about how much your civilian analogue costs.)

The Sectera runs a mobile version of Microsoft Windows, including versions of Word, Excel, PowerPoint, and Windows Media Player. The NSA claims that the installed versions of Internet Explorer, WordPad, and Windows Messenger are good enough for data that’s classified at a level of Secret. Presumably the federal spooks have found a way to protect IE from the numerous security flaws that continue to plague the Internet’s most popular browser…

If he can’t take his BlackBerry with him, I feel good knowing that there are a few other options out there for Obama, including the Sectera Edge. I’ll be honest, I’ve never heard of the device. But if it’s good enough for the President of the United States, it’s got to be good… Right?… 🙂

HTC Iolite leaks again; This time we have a bigger picture

Ladies and gents, we have a better picture of the upcoming HTC Iolite. As you can see from the image...