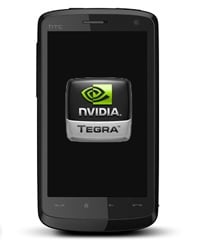 Graphics-processor maker nVidia’s push into the mobile space may soon be getting a boost from HTC. nVidia has yet to launch their highly-touted and powerful Tegra mobile chipset platform in commercial devices (although, Microsoft has been rumored to be working on a Tegra-powered handset), but that may all change with HTC’s rumored adoption of nVidia’s Tegra chips.

The International Business Times is reporting that HTC will be using nVidia’s multimedia-powerhouse silicon in their 2009 handset lineup (which was recently leaked (allegedly)). Not only would HTC’s move to the nVidia Tegra platform be a huge boon to discerning consumers who demand high performance multimedia capabilities, but it could also help boost HTC’s handset revenue. “We believe that HTC has selected the NVDA Tegra applications processor for a new handset design that will ramp in [the second half of 2009],” said American Technology Research’s Doug Freedman. “We estimate Tegra could add $100M to 2H09 results.”

The nVidia Tegra 650 chipset is being touted as a “computer-on-a-chip” that was designed “from the ground up” to give the consumer a desktop/laptop computer-like experience from a mobile processor. The nVidia Tegra 650 follows the Tegra mobile platform’s mantra of integrating an ARM CPU, a HD video processor, an imaging processor, an audio processor, and an ultra-low power GeForce® GPU in to a mobile chip that is “up to 10 times” more efficient than the competition. The video below shows what kind of hardware was integrated in to the Tegra mobile platform.

Look for any HTC smartphones powered by nVidia’s Tegra 650 to feature:

With HTC’s 2009 lineup purportedly leaked to the masses, and Mobile World Congress bearing down on us next month, it wouldn’t be too surprising to see HTC showing off their first nVidia-powered smartphone featuring the Tegra 650 or Tegra 600 chipset.

Those of us that were eagerly hoping and waiting for the launch of the Kogan Agora (and Agora Pro) are...