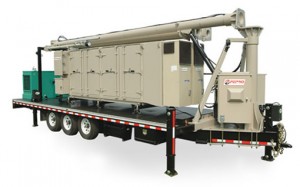 Not your grandfather's COW

If you thought AT&T’s network reliability was questionable on a daily basis, we hope you didn’t have to suffer the clogged-up cellular networks in the Washington D.C. this morning. AT&T and T-Mobile customers have been reporting spotty reception, significantly delayed text messages, and non-responsive data networks in the nation’s capital this morning as millions gathered to watch President Obama’s inaugural ceremonies.

AT&T and T-Mobile had beefed up their network capacities in Washington D.C. in anticipation of a barrage of wireless customers flooding their networks with SMS text messages and voice calls. AT&T said it invested some $4 million to boost capacity along the parade route, increasing its staff by 60% and pulling in two COW (Cell towers On Wheels) to help deal with the wireless onslaught.

T-Mobile’s own measures to shore up its wireless network is said to have exceeded any preparations made for a single-day event. T-Mobile helped ease network congestion by directing traffic away from congested towers to cellular towers with spare bandwidth.

Sprint increased capacity for its Sprint network by 40% and boosted their Nextel network capacity by 90%. The second-place US CDMA carrier also deployed COLTS (Cell towers On Light Trucks) to expand its network capacity even further.

Finally, Verizon announced that voice calls were coming in at three to five times their normal volume. Still, Verizon customers were largely able to get through to friends and family, even in the most congested areas near the capital.

Even with all the inaugural preparations, it seems that GSM networks in the Washington D.C. area fared the worst during President Obama’s historic inauguration events. With millions of wireless customers scrambling to make voice calls and send text messages, it’s no wonder wireless networks in the nation’s capital crumbled this morning. Even the nation’s most reliable network, Verizon Wireless, saw network congestion problems. Still, AT&T seems to have handled this morning’s network-blitz with the least amount of grace.

What say you, readers? Anyone near the D.C. area this morning care to comment?

Web-based services pop-up and fizzle-out all the time in the mobile space. There's just no telling what service will soar...