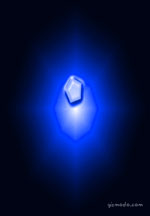 You might recall the ‘I Am Rich’ App that hit the Apple App Store last year. Priced at a cool $999, the application was nothing more than useless ‘bling’ that allowed the purchaser to show off how much money they have. Why? Well, the app did nothing you see. Well, almost nothing… when you opened the app there was a glowing ruby gem that appeared on screen. Woohoo. $1,000 down the drain.

As I suspected, a similar app has appeared in the Android Market. Called ‘I Am Richer’, this time around the app displays a blue gem on screen… and that’s it. Oh, and the price tag? $200. Not surprising, as Google did set a price cap in the Market (last I checked anyways) of $200.

If you’re ready to try on all the smug satisfaction you can handle, knowing you’re one of the precious few stupid enough to purchase such a useless application… Go ahead and pick up ‘I Am Richer’… Honestly, if you are really considering such a purchase… Do everyone a favor and give the $200 to a person or charity that can use it!

Now here's something cool. If there's one thing I learned from Mobile World Congress, it's that having a stack of...