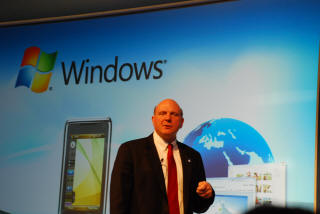 At the beginning of this month, we mentioned Windows Mobile 7 may be released during 2010. Apparently, that’s been confirmed by Steve Ballmer himself in a recent “Microsoft Strategic Update” conference call. Here’s exactly what he said:

We’re extending, though, we’re extending our offer to include not only the core platform, but applications and services. We’ve made a nice release announcement last week of Windows Mobile 6.5. We’ve got Windows Mobile 7 coming next year. We’re getting more and more synergy with Windows, so the browser improvements, et cetera, should be quite rapid.

He went on to talk about Windows’ competitive advantages and how differences between the desktop and mobile versions of Windows will fade in the future:

Windows, Windows Mobile, and those two will become I’d say closer in many ways. There’s still a real distinction between what’s a phone and what’s a PC. And yet the amount of technology that can be shared across that border continues to go up.

On the first Windows slide I actually showed you the union of Windows and Windows Mobile, compared to Apple, compared to RIM, because I think that’s the right way to think about it, that’s the way we think about it. There will be really shared technology across Windows and Windows mobile. The browser is an example, the presentation surface is an example. Some day even the kernel will be an example.

Finally, for those who think Microsoft will enter the handset business, Ballmer clearly said “NO!”:

Now you must know that I’m not taking this too seriously — after all, we still have to see working Windows Mobile 6.5 smartphones on sale. However, that’s not the problem. I wouldn’t mind waiting longer if the final product ends up being great. In that sense, capacitive touchscreen support tops my list of wishes for the next Microsoft’s mobile OS. What would you like to see in Windows Mobile 7?

It looks like the Nokia N95 and Windows 3.1 have finally been united! Wait... what? You read correctly, what you're...