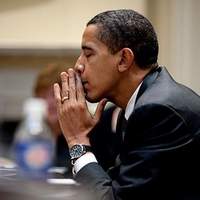 In a move that underscores the US’s need for radical economic policies and philosophical change (yes, we can), President Obama and his team of financial wizards are calling for fees on the airwaves used by wireless carriers in the US. The White House released a $3.9 trillion budget today, which includes provisions to levy fees on any entity holding wireless spectrum licenses.

The US has been auctioning off wireless spectrum licenses since the 1990’s, essentially granting exclusive broadcast rights to any companies with the cash to snatch up a particular swath of wireless frequencies. Spectrum auctions have generated billions upon billions of dollars in revenue for the federal government, but the finite supply of spectrum real-estate is quickly becoming scarce. Facing the prospect of reduced revenue from such auctions, it seems President Obama is trying to revive a years-old initiative to charge spectrum licensees a fee for their wireless spectrum assets.

The proposal isn’t new to Capitol Hill veterans. Spectrum fees have been opposed in the past, and there’s little reason to believe that such fees will be approved without much opposition. The silver-lining this time around may lie in the Democrat-controlled Congress that might be more willing to align themselves with President Obama’s plans for change in the US.

“We are currently reviewing the details of the proposal and look forward to participating in the next stages of this issue,” stated cellular industry trade association CTIA. The nation’s Big Four wireless carriers (Verizon, AT&T, Sprint and T-Mobile) declined to comment, citing the preliminary budget’s lack of details on the proposed spectrum license fees.

Here’s the little we know about the President’s new wireless revenue proposal:

In the face of a multi-trillion national debt and seemingly carefree stimulus spending, Obama’s push for few billions in revenue from spectrum fees looks like small beans. But, given enough beans, you can make some mighty tasty chilli!