The Nokia 5800 XpressMusic is now available in the US with North American 3G frequency support (read: AT&T 3G support)! Good news for Symbian touchscreen fans with an itch for all things music, to be sure, but there’s something you should know about early-production Nokia 5800 XpressMusic handsets. According to Nokia, all 5800 XpressMusic cellphones manufactured before February sport defective speakers that will fail after just a few months of use.

The problem, apparently, is rooted in a low-quality component supplier serving up sub-par speaker units to Nokia’s factories. The problem was quickly identified and Nokia moved to not only replace the defective speaker units, but also kicked the garbage-pushing component supplier to the curb. The move has payed off with high-quality speakers now being shipped with all Nokia 5800 XpressMusic handsets. It would stand to reason that the new Nokia 5800 XM NAM is free of the defects that plagued earlier European models. 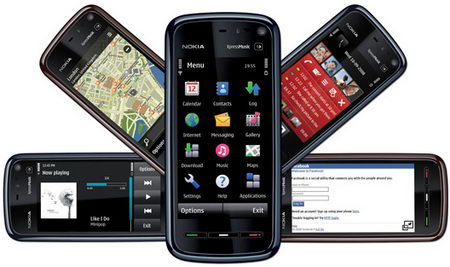 It’s unclear just how many 5800 XM units are circulating in the wild with these defective speakers. Nokia shipped over 1 million of these music-centric XpressMusic handsets before the end of January. If you’ve had your 5800 XM serviced for faulty speakers before February, we’d suggest going in for another service – Nokia didn’t drop-kick their speaker- supplier until mid-January, so you might have just replaced one defective speaker for another faulty piece of kit.

The problematic speakers were replaced with speakers from another supplier, both in production and warehouses. I’d like to emphasize that we have replaced not only the speakers but also their supplier, i.e. at the moment we use speakers from the new supplier at our manufacturing plants, as well as in our service centers. It is very easy to confirm this, because the new speakers are visually different (see the picture above.)

Service centers started receiving the new speakers during the last decade of January, so all users who replaced the speakers since then shouldn’t face this problem.

It should be also noted that Nokia 5800 XpressMusic is one of our focus products, so its sales were watched carefully by our R&D department from the beginning; and, as soon as we heard about this matter, an R&D rep was dispatched to Russia to work on the problem on site.

The secondary replacement issues reported by Mobile-Review were related to the first phones and, at that moment, there was no solution to the problem, so the defective speakers were replaced with speakers from the same (at that time)  supplier. When the problem was studied more carefully and it became clear that the new speakers (from the same supplier) do not solve the problem, the supplier was changed, the plants started putting new speakers in, and service centers started getting speakers from the new supplier too. I can not name the supplier of the defective speakers, but it is a very respected company with a world-known name, whose  quality of products nobody doubted. But, unfortunately, these things happen, most likely, to everyone.

It should be emphasized that, for these kinds of quantities, and for a global company like Nokia, to solve a problem within a month is a very short time. Sure, a record number of devices were sold during December, and fewer buyers would have been faced with this problem if the sales had been lower. But please believe me, we have been seriously working on the speaker quality problem and we think that, for the moment, the problem is solved.

So, the 5800 XpressMusic can now be bought without any fears. And if you had to replace your speakers, from the end of January – everything should be all right;  if you bought the phone earlier and you have problems, now they can truly be solved in service centers by replacing the speakers.

Want some FREE, streaming TV on your iPhone? Of course you do. As the first major US network broadcaster to...