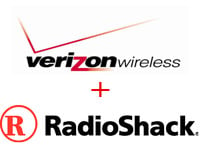 Verizon Wireless and Radio Shack parted ways a few years back, when AT&T was the leading US wireless carrier. Since then, Radio Shack has been a one-carrier type of retailer. Tomorrow that all changes.

Boy Genius has confirmed that Radio Shack will once again offer customers Verizon Wireless cellphones and Verizon Wireless plans (of course). The move will allow Radio Shack to cash in on the hype built around Verizon’s new position as the market leader in the US, and will bring high-end smartphones like the BlackBerry Storm to Radio Shack’s handset lineup.

Of course, you’ll have to sign up on a two-year contract with Big Red in order to get those prices. But, at least now you can help support your local Radio Shack!

It's official. This Twitter thing is getting big. The once-obscure micro-blogging, social networking, me-centric service known as Twitter is really...