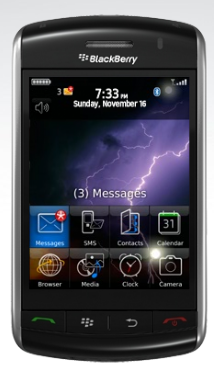 A little while back I wrote a brief summary of my thoughts as regards the Storm, having had just five minutes to play with it. The point of this, to re-iterate, was to mirror the time that your average consumer might get to play with the device in a shop, and hence to relay first impressions.

As it stands, those impressions were not well-received, despite the fact that most of them went on to be validated by the detailed reviews of many professionals within the industry. I was relatively well-placed in terms of being amongst the first to review the device, as it got its launch early with Vodafone UK.

So to balance the playing-field, and to try and keeps things objective, I thought it only fair to re-visit the Storm, and see if I had reacted too harshly, if both my thoughts (and those of LOTS who had reviewed it also) were off the mark. The other day then, I perused the Vodafone shop nearby to me, and spent another five-mins driving around the Storm’s GUI to see how things were running.

The first thing I noticed was the firmware the device is now running is better than before. Regular readers of IntoMobile will know that the Storm has had lots of firmware updates since it’s launch, and the laggy behaviour I experienced (which must have been with the first official firmware) seems to have been improved quite a bit. Gone were the long waits between screen updates, or partial screen re-draws.

I’d also say the device feels “OK” for weight too – previously I’d felt it was a bit light for the size that it was, which to me gave it a feel of “budget” materials being used. But certainly having used it a bit more, I think I’d be happy enough with it’s weight (my own feelings are that a premium device should have the mass/density that suggests it’s materials, but I know many don’t agree).

However the one area I still think has issues is that touchscreen. In fact, I’d argue for much of what you want to do, it isn’t a touchscreen. Sure, you can select items you want by touch, but you can’t choose them – for that you have to physically depress the screen, much like a giant button. Having tested the typing, both in portrait and landscape-mode keyboards, I found that the need to depress the screen for each was ungainly, but moreover, I’d still have concerns about the durability of the mechanisms behind the screen. You can imagine a panel of damped springs, that give the travel of the screen, wearing slowly over time. And given one of the main uses would be for typing, that screen is going to get pressed 000’s of times in a very short period.

If that weren’t enough, I’d be concerned about both dust and fluid ingress around the screen, since space must exist for the screen to travel, however small. At the very least, that area is going to be dirty very quickly.

So what’s my overall feeling? Well, I couldn’t use one – quite apart from being spoiled with the astounding iPhone touchscreen, I wouldn’t be able to comfortably use the moving screen on the Storm – I know this for myself from just a couple of minutes playing with it. And before the RIM-fanboys go off on one, I use a BlackBerry Bold on a daily basis and really like it (apart from the battery life!) , and think RIM’s latest products are great – but I think an 8900 will be my next purchase, rather than the Storm.

I’d also be interested from readers who have gone in to a shop (or had a friend’s device to try), and had the similar amount of time to play with the device – how did you find it? Were you at odds with the keyboard, or did you like it? Let us know, we’re eager to hear…..!

More in RIM (Research in Motion), The Five-minute Fiddle

Citigroup’s Jim Suva has issued a statement to clients claiming RIM's last quarter of 2008 will be their first quarter-over-quarter...