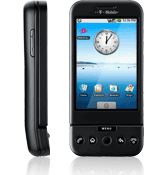 Google Android blog site Androinica has an interesting UK-related story this week. Apparently the RC9 update that has begun rolling out for UK is lacking a stack of stuff, including: “voice search, latitude, any MSN/AOL/Yahoo chat options, and … paid applications”.

Checking out the comments also that follow the post it’s possible to see that UK users are confirming the intial suspicions. Worse, it would appear that other regions have still further differing functionality. Suffice to say the sentiment towards the exclusive operator for the device, T-Mobile, really isn’t very positive either!

But that’s the thing with super hi-tech devices – the plethora of potential options that could/should/would be on the device differ between people, and when some features don’t make it, then it can really get peoples’ ire…! All that said, differing functionality across regions isn’t really acceptable in my view.

Let’s see how this one plays out – I’m sure we’ll see more commentary surfacing on the InterWeb over the next month or so!

Cellebrite -- the company which makes devices that allow mobile phone content transfer, backup, and management systems at the point...