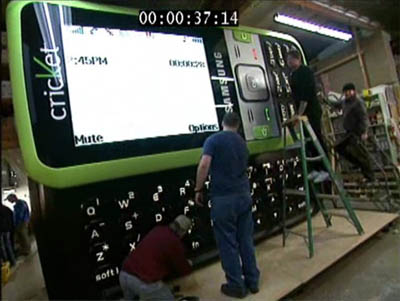 What is a surefire way to generate buzz and PR? Well, you break or set a ridiculously obscure Guinness World Record of course! That’s exactly what carrier Cricket, and manufacturer Samsung are set to do. Together they’re about to set the Guinness World Record for the world’s largest cellphone by building an insanely large Samsung Messenger. In an age where smaller and thinner tend to be better, Cricket is going BIG. 😛 The phone will be officially unveiled tomorrow. Should be interesting.

What’s even crazier about this, is the device actually works. Make the jump to check out a behind the scenes video of the larger-than-life device.

Engadget is having some fun with this one in the form of a caption contest… So head on over there to submit your entry.

In what looked like a clever product pitch on NBC's Jimmy Fallon, Engadget's Joshua Topolsky made an appearance on the...