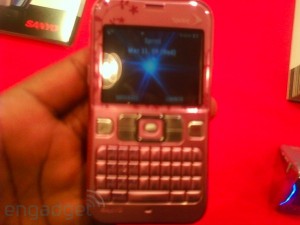 Wow, as if this thing needed to be an even bigger uggo. Sanyo’s SCP-2700 has made another appearance, bearing Sprint branding and hideous lovely pink floral design, alongside the quilted blue we spotted earlier. The only thing we really know spec-wise is a 1.3 megapixel camera, but don’t expect this one to be on the high end. On the plus side, the SCP-2700 will only be costing $39.99 on contract, so it’s got that much going for it. Like any sketchy bar pick-up, I doubt this one will get any prettier once it’s in focus, but hey, you never know. Let’s open up nominations for its commercial name… Maybe a monicker in honour of the bereaved self-immolating bargain texter: “QuickTrash”.

Some quick and exciting Android news this morning. Seems as though the Android 'Cupcake' update rumors have been floating around...