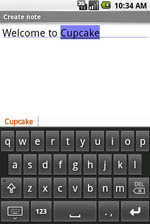 Some quick and exciting Android news this morning.

Seems as though the Android ‘Cupcake’ update rumors have been floating around forever… Lets add to them shall we? Well, ok maybe this time around its a little better than a rumor, as Pocket-lint is claiming that T-Mobile reps have confirmed the Cupcake update will hit us sometime in April. To be exact:

Should be an exciting April for Android enthusiasts. The HTC Magic is due out, now Cupcake should be coming (which makes sense, to go along with the Magic debut)… Can’t wait for April!

Folks running the BlackBerry Pearl 8120 on T-Mobile will be pleased to know that a very much needed OS 4.5...