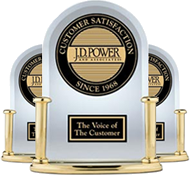 The nation’s largest wireless network is apparently losing its edge over the competition. Verizon Wireless has, for some time, been the market leader in terms of voice call quality in the US, but a new report from JD Power seems to indicate that Verizon is slowly losing ground to wireless carriers like AT&T and Sprint.

JD Power found that, overall, call quality in the US has been stable. The past 18 months saw 15% of wireless calls behaving badly – dropped calls, low-quality audio, voicemail failures and the like. More importantly, JD Power found that AT&T and Sprint customers reported fewer problems with voice calls while Verizon and Alltel customers reported more problematic calls.

AT&T improved in terms of voice distortion, call echoes and voicemail notification failures, while Sprint reduced the occurrence of voice distortion. Verizon saw a 1% increase in the number of calls not being connected, while Alltel saw larger jumps in calls not being connected, calls being dropped and voicemail notification features.

Verizon is still tops for voice call quality throughout most of the US, with the exception of the North Central region where US Cellular took the top-spot. But, it’s interesting to see Verizon’s competition improving their overall call quality and catching up to Verizon.

In-flight WiFi has the potential to save you from hours of agonizing boredom when flying to and fro. But, the...