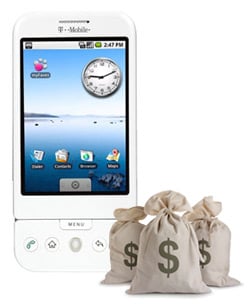 It’s always good to hear about a device that makes a good profit these days, especially in these crazy economic times. Case in point comes the T-Mobile G1. According to a new comScore report, the G1 makes the largest profit for T-Mobile of any device on their network. That said, the G1 is still only the 8th best selling device on T-Mo.

What’s the secret? Surely the required data plan increases the profit margin… and If you own a G1 you probably shelled out $179.99 for it unless you hit up Amazon or Costco. The real secret to profits on new devices these days may be in the touchscreen. The iPhone and BlackBerry Storm are profit leaders over at AT&T and Verizon.

Come to think of it now, I’m less surprised at all of the touchscreen devices on that leaked slide from which Samsung boasted their 2009 lineup. Touchscreen sure does seem to equal cash in the pocket. Samsung must know exactly what they’re doing.

All of the Android users out there are no doubt excited these days, especially with the leak of the Samsung...