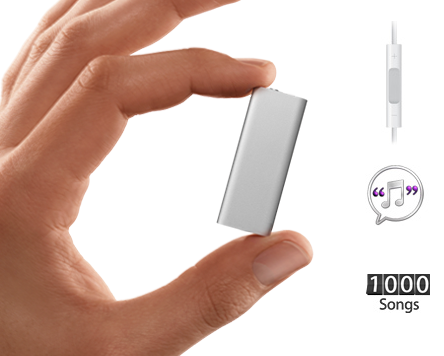 Apple is rebuffing those that are complaining in respect of it’s new iPod shuffle’s supposed hardware DRM. The kerfuffle all kicked off when Apple released the new shuffle, and put all the buttons on the in-line headphones/remote. iLounge and the Electronic Frontier Foundation said they found a chip behind the buttons, and assumed it was authentication.

However, Apple provided some more details and have said there is no encryption on the control chip – which should mean that third-parties can make their own headphones. What Apple does offer though is a license option, whereby developers/manufacturers can buy the mic and chip in the remote, as part of it’s signature “Made for iPod” program. Of course that doesn’t answer the question if the third-parties will get a “Made for iPod” badge if they come up with their own chip….

Quite what opinions are regarding the new iPod shuffle are somewhat split – the last generation was SO good, this one perhaps has taken minimalism a step far – if it’s also causing issues for the third-party manufacturers (who have potentially a lucrative accessories market off the back of Apple), then it could be in for a rough ride!

For those that want their mobile music on a simple, easy to use, cheap, and generally great device – have no fear – the last gen shuffle is still available! Yay! Either way round you can find all things Apple and Shuffle (and UK) here.

[Story via: ipodnn.com / Image via: Apple]

Not sure if there are any Cribbage players out there, but I used to play quite a bit with friends...