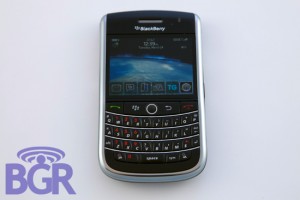 We’ve seen a video of the BlackBerry 9630’s hardware, but what we really want to know is how the ol’ girl runs. You can only say so much about a prerelease operating system, but there are a few things worth noting: a lot was borrowed from the Storm, such as gestures, only you’re using the trackball rather than a touchscreen. Those silky-smooth screen transitions also make the leap to QWERTY-dom, as does much of the user interface. In fact, the 9630 Niagara is so similar to the Storm, it also lacks Wi-Fi. It’s sad the sacrifices RIM still makes to artificially segment their products – really guys, just put Wi-Fi on everything, the carriers you piss off by cutting into data revenue will be counterbalanced by voluminous happy customers. Despite the shortcoming, BG is overwhelmingly happy with the Niagara.

Verizon + 9630 = the best BlackBerry experience on the planet. This is the phone you’ve been waiting for. Smash those Storms, donate them to charity, sell them on eBay or give them to your significant others you want to slowly and cruelly torture. This is it as far as Verizon goes.

Excited? Current estimates place a Niagara launch at May, most likely announced at the Wireless Enterprise Symposium.

The very popular Nobex Radio Companion app for the BlackBerry has been updated. The streaming radio app includes a ton...