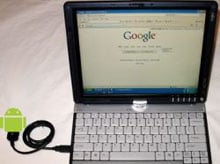 If you’ve been hoping that Google and the Android Market would allow a truly ‘open’ experience… and have been getting tired of the banned apps that seem to flow down the pipe out of the Apple App Store… It looks like Google might be starting to head down that same road.

According to Seth, an Android Developer and ‘False Dichotomies‘ co-host, the Android Market has started to ban tethering apps for violating the Developer Distribution Agreement. Seth’s very own tethering app, ‘WiFi Tether for Root Users’ has been given the boot, and the explanation offered to him on the ban is a ‘rather twisted web’. Google’s explanation:

“Google enters into distribution agreements with device manufacturers and Authorized Carriers to place the Market software client application for the Market on Devices. These distribution agreements may require the involuntary removal of Products in violation of the Device manufacturer’s or Authorized Carrier’s terms of service.”

“Your Data Plan is intended for Web browsing, messaging, and similar activities on your device and not on any other equipment. Unless explicitly permitted by your Data Plan, other uses, including for example, tethering your device to a personal computer or other hardware, are not permitted.”

Interesting to say the least. Would be nice to hear more from Google, to hear if they’re always going to ‘tether’ their own terms of service with the carrier… In this case, T-Mobile. Seth goes on to question the decision, and raises a few questions regarding ToS’s for T-Mo and other carriers:

We’re going to hear more on this one in the days ahead for sure. What are your thoughts?

Korean developer Diotek has launched their new handwriting recognition app for the Android G1. Character recognition is something of a...