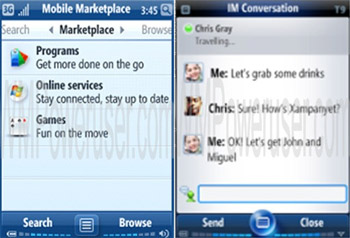 Microsoft is all proud to announce the wide industry support for Windows Mobile 6.5 and Windows Marketplace for Mobile at the CTIA.

Among the Windows Marketplace for Mobile’s features Microsoft is highlighting are:

But it’s not just the app store details Microsoft wanted to share at the CTIA. The Redmond giant also announced a new partnerships with the Design Museum London and Council of Fashion Designers of America to offer a variety of free designer themes for Windows Mobile smartphone. Mizrahi is selected as the first in a series of designers to create exclusive themes, while other designers will be announced in the coming months.

Moreover, Microsoft unveiled the new, easy-to-use Theme Generator that will provide people with yet another way to personalize their device and which will be available later this year through windowsmobile.com.

There you have it. Tons of stuff from Microsoft which seem to burst with optimism. We’ll see how all that will play out…