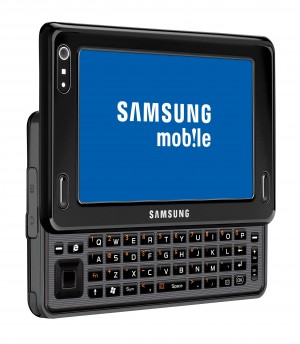 WiMAX’s near-term future in the US is looking good. Sprint is expected to roll out WiMAX service to 10 major US cities this year, and that means we’re going to see some WiMAX-capable handsets launching soon. And, this being CTIA Wireless 2009 and all, Samsung has decided to go ahead and launch their first WiMAX phone – the Samsung Mondi smartphone. The Samsung Mondi will be heading up Samsung’s push into the US WiMAX market through Clearwire’s Clear WiMAX service.

As expected, the Samsung Mondi sports both WiMAX and WiFi radios so that it won’t ever be too far from a high-speed wireless connection. And, with a slide-out QWERTY keyboard and monstrous 4.3-inch touchscreen, you can bet that this Windows Mobile 6.1 Professional smartphone will make the best use of all that mobile broadband goodness. The Mondi also features a 3.0-megapixel camera, GPS (Route 66), Bluetooth 2.0, HDMI video-out and 4GB of on-board storage. Samsung says that the Mondi will be completely customizable with drag-and-drop widgets, so TouchWIZ UI is a good bet.

“The Samsung Mondi is an important step toward our goal of bringing 4G network speeds and connectivity to people across the U.S.,” said Bill Ogle, Chief Marketing Officer for Samsung Mobile. “The Mondi™ is a great match for people who want immediate access to the Web without having to sacrifice download speed and portability.”

Samsung is apparently planning to release the Samsung Mondi in just a single shade of black. Pricing and exact availability information isn’t yet known.