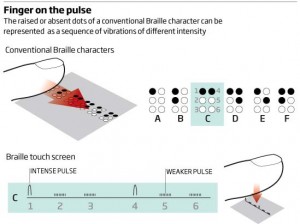 By translating characters into Morse-code style vibrations on a Nokia 770 Internet Tablet, researchers at the Finnish University of Tampere were able to allow the blind to read Braille on a touchscreen. Sharp pulses would indicate a full indentation, while low, long ones would indicate blanks.

“It took some time for them to start reading, because this representation is totally different from anything else that they had previously used,” says Rantala. But once the volunteers were used to it, they were able to speed it up and read a character in as little as 1.25 seconds.”

Japanese researchers are working on something similar for keyed handsets, but touchscreen phones are certainly the ones that need this work the most; at CES, Stevie Wonder even made an open plea with the industry to not forget the blind when charging ahead with touch-enabled mobiles. New technology like this really open up the doors for a whole new market of mobile users, so here’s hoping manufacturers pick this up soon and get it into their products in the near future. For a closer look, check out the full report.

In case you missed it, AdMob has recently published their latest mobile metrics report for your viewing pleasure. It's always...