AT&T is taking the upcoming Palm Pre’s launch quite seriously. With hype building to a frenzied level, and nearly every mobile enthusiast foaming at the mouth to put hands on the multi-tasking, WebOS-toting Palm Pre, it makes sense that AT&T is a little nervous. AT&T is so concerned, in fact, that the No. 2 US wireless carrier has started distributing a Palm Pre-bashing comparison chart to its employees. The internal AT&T document pits the iPhone 3G and Palm Pre side-by-side, dinging the Pre for its lack of world-roaming support (the Pre is a CDMA-only handset) and single color offering (Black). 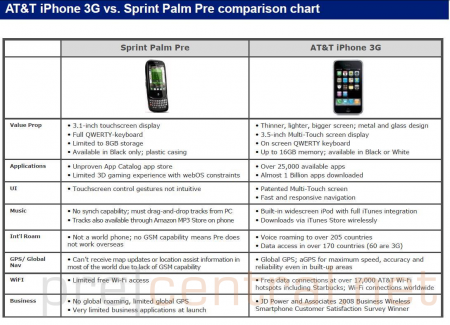 When Verizon Wireless launched the BlackBerry Storm as an iPhone-fighting BlackBerry-equivalent, AT&T was quick to distribute comparison documents that showed why the iPhone was a better choice. This time around, AT&T wants to nip the Palm Pre’s launch right in the bud, giving employees a few talking points on why the iPhone 3G (and presumably the new iPhone) is a better buy than the Palm Pre.

AT&T undermines the Palm Pre by pointing out that the Pre won’t be able to make use of AT&T’s 17,000 hotspot-strong WiFi network in the US. The Palm Pre has an “Unproven App Catalog app store.” The Palm Pre is thicker and sports a plastic casing with a smaller touchscreen display. Of course, AT&T makes no mention of the fact that the Palm Pre can multi-task until the cows come home, features a hard-keyboard, allows for gesture-controls and even does the dishes. Okay, that last one was made up.

The Palm Pre may not overtake the iPhone, but it’s good to see the mighty AT&T quivering in their boots. The only question is – will Palm offer a GSM Palm Pre, possibly on AT&T? Palm would have to survive past 2010 to make that happen…

While AT&T is having a rough first quarter just like everyone else, iPhone hype is showing no signs of slowing,...