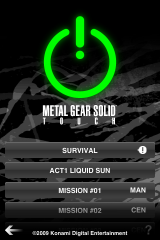 Konami announced today that the full version of METAL GEAR SOLID TOUCH (MGST) has launched on the Apple App Store – this contains eight additional gameplay levels to the previous version!

Developed by Kojima Productions and designed specifically for the iPhone and iPod touch, METAL GEAR SOLID TOUCH unfolds in five chapters over a span of the 20 stages with familiar enemies attempting to keep Old Snake from accomplishing his mission. The characters featured in the latter eight stages of the story will feature new abilities, putting them in a class of their own.

Taking advantage of the iPhone’s capabilities, players can shake their iPhone during Mantis Boss Battle to attack. Once all 20 stages have been cleared, a Survival Mode is unlocked, which lets players skip the story images and play stages consecutively without replenishing their life gauge.

As an added bonus, players will have access to over 30 original wallpapers that are available from Drebin’s Shop. Drebin Points are awarded according to the score at the end of each stage. The wallpapers feature a variety of artwork that include unreleased illustrations by METAL GEAR SOLID character designer, Yoji Shinkawa, gorgeous 3D CG, as well as images that were designed using METAL GEAR SOLID as a motif.

Those who have already installed the initial release will apparently be able to update to the complete version for free. Those who haven’t bought the game yet can get the complete version from the Apple App Store. There’s also a MGST “Lite” version on the way for free – which will let people sample the delights of the MGS world before buying.
If you want more info on MGST, you can check it out here.

Anyone remember recently I posted on Spatial View's "Wazabee 3DeeShell" for the iPhone - it lets you view 3D on...